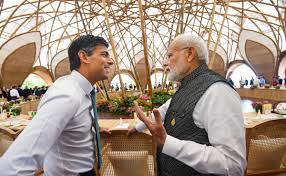 United Kingdom (UK) and India decided to launch a Young Professionals Exchange in 2023.