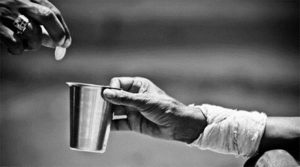 The Supreme Court has asked the Centre and four States to file their response within three weeks on a plea seeking a direction to repeal the provisions criminalizing begging.