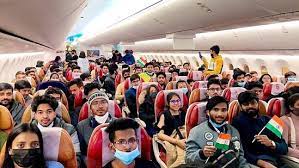 The Government of India has launched a ‘multi-pronged’ initiative named ‘Operation Ganga’.