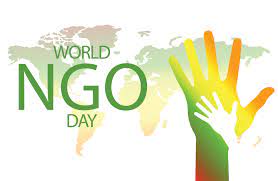 Every year, 27th February is observed as the World NGO day all over the world.