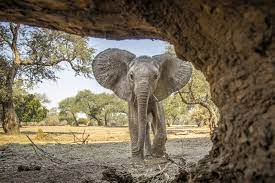 It has named the five animals for framing instead of firing at. These are the elephant, polar bear, gorilla, tiger, and lion.