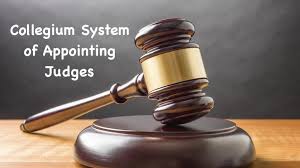 The government has said that there was a call from within the judiciary and parliamentarians to change the collegium system for appointment of judges.