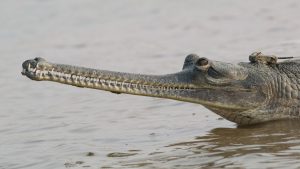 Gharials, sometimes called gavials, are a type of Asian crocodilian distinguished by their long, thin snouts. Crocodilians are a group of reptiles that includes crocodiles, alligators, caimans, and more.