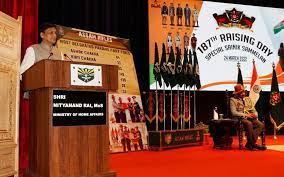 The 187th Raising Day of the Assam Rifles has been celebrated in Shillong.