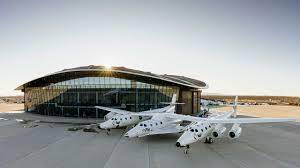 Unity 22” will be Virgin Galactic’s next rocket-powered test flight of its SpaceShip- VSS Unity.