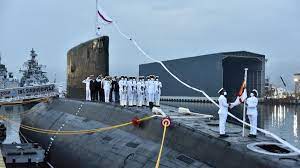 The Indian Navy decommissioned its Kilo class Submarine, INS Sindhudhvaj from its service at Vishakapatnam after 35 years of service.