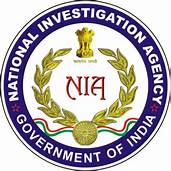 The Union Home Ministry handed over the probe into the barbaric killing of a pharmacist at Amravati in Maharashtra to the National Investigation Agency (NIA).