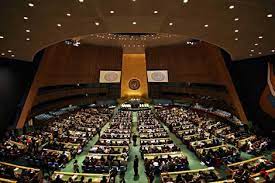 The Non-Proliferation Treaty Review Conference which was held in New York ended without adopting a substantive outcome due to Russia’s objection.