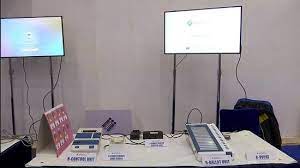 The Election Commission of India (ECI) has proposed a new Remote Electronic Voting Machine (RVM), which will allow domestic migrants to vote in national and regional elections.