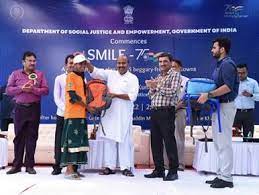 The Ministry of Social Justice & Empowerment has launched the “SMILE-75 Initiative”.