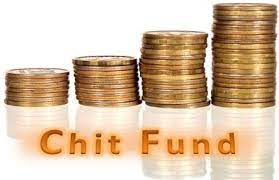 Rates of GST on the chit funds have been raised from the earlier 12% to 18%. This may raise the borrowing cost and benefits out of the chit fund.