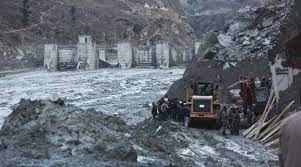 With residents of the Joshimath town reporting an increase in landslides and hundreds of houses at the hill town in Uttarakhand developing cracks, the district administration has issued orders to stop work on the National Thermal Power Corporation’s (NTPC) Tapovan Vishnugad hydropower project.