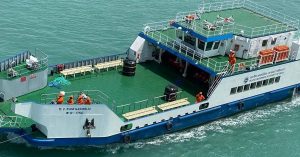 The Inland Vessels Bill 2021 was passed in Lok Sabha.