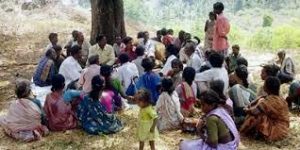 India’s tribal communities form 8.6 percent of the country’s population according to the 2011 Census.