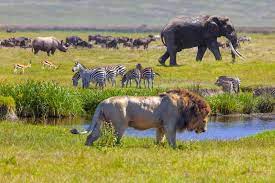 According to Living Planet Report 2022, Wildlife populations decline by 69% in 50 years.