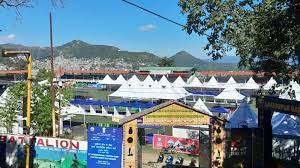 The 10th International Tourism Mart (ITM) for the northeast region will begin in Mizoram capital Aizawl on November 18, 2022.