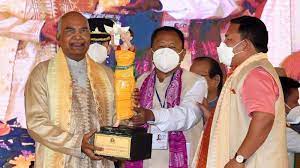 President Ram Nath Kovind, who is on a four-day visit to the North Eastern States, will attend the concluding session of the 61st Bodo Sahitya Sabha at Kachubari in Tamulpur district of Assam.