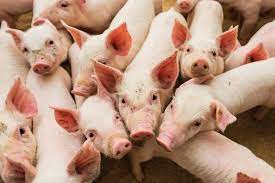 The African Swine Fever has stuck Meghalaya. Earlier, it had struck Mizoram.