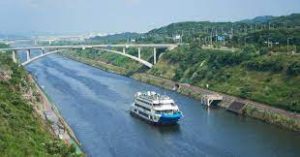 Director General of the National Mission for Clean Ganga spoke about the Arth Ganga model during World Water Week 2022.