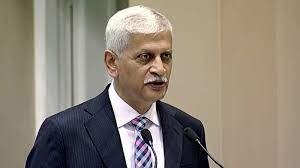 Justice Uday Umesh Lalit has been sworn-in as Chief Justice of India.