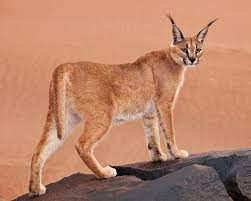 Caracal, which was used by India’s nobility in the sport of coursing like the cheetah, is struggling to survive, although both species had a similar distribution in the past.