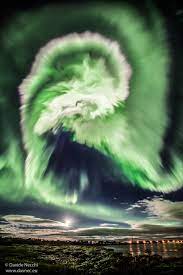 Stunning aurora glow was recently observed above Iceland after a ‘dead’ sunspot erupted.