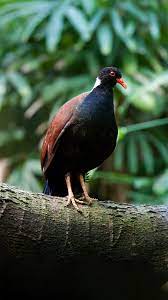 Black-Naped Pheasant-Pigeon was rediscovered after 140 years.