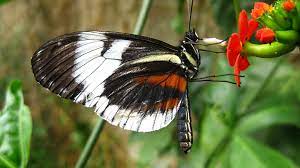 A new study has thrown light on many interesting aspects of butterflies’ adaptation and evolution processes.

Highlights of the Study:

The findings were categorised into three: