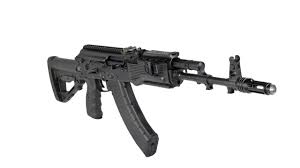 India has finally signed a deal with Russia for the procurement of 70,000 AK-203 assault rifles to be bought off the shelf.