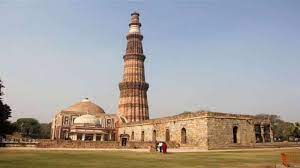 The Ministry of Culture reported to Parliament that 50 of India’s 3,693 centrally protected monuments were missing.