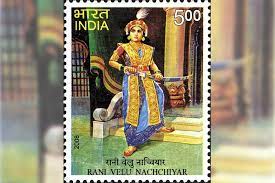 The Prime Minister of India paid tributes to Rani Velu Nachiyar on her birth anniversary.