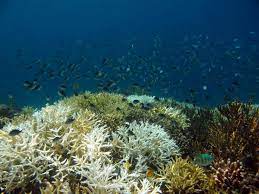 A new study was published titled Climate Risk Index for Marine Life, which captures the climate risk for nearly 25,000 marine species and their ecosystems.