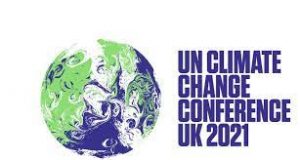 The UK will host the COP 26 UN Climate Change Conference from October 31 to November 12.