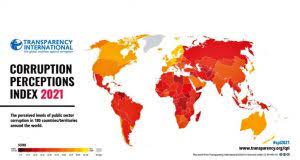 The Corruption Perception Index (CPI) 2021 was released by Transparency International.