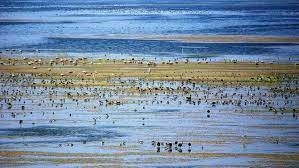 Four more Indian sites – two each from Haryana and Gujarat – have been recognised as wetlands of international importance under the Ramsar Convention.