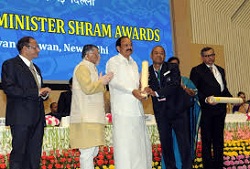 The Government of India has announced the Prime Minister’s Shram Awards (PMSA) for the year 2018.