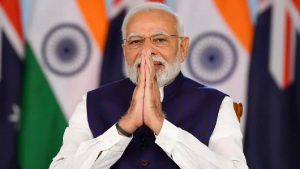 Prime Minister will unveil the logo, theme and website of India’s G20 Presidency on 8th November 2022.