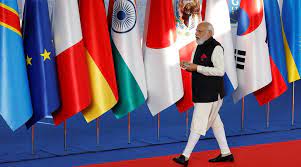 India would be taking over the Group of Twenty (G20) presidency at “a time when there are so many challenges”, the Finance Minister said.