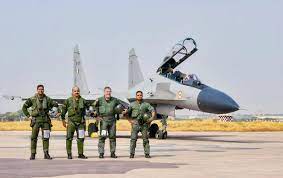 The chiefs of Indian and French Air Forces recently joined the Air Exercise Garuda-VII in Jodhpur.