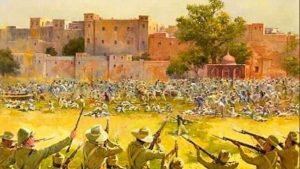 The Prime Minister paid tributes to people killed in the Jallianwala Bagh massacre in 1919.