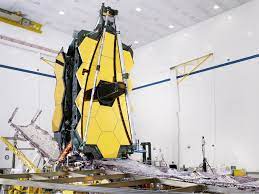 Engineers have unboxed the James Webb Space Telescope in French Guiana and will now prepare it for launch.