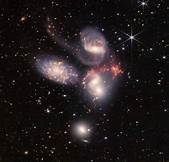 NASA unveiled images from the James Webb Space Telescope, the largest and most powerful orbital observatory ever launched.