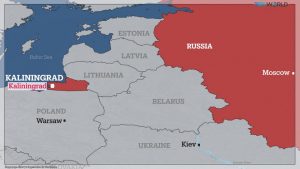 As the Russia-Ukraine conflict rages on, the spotlight is on Kaliningrad, Russia’s westernmost region.