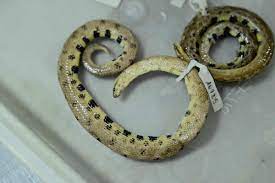 Scientists have discovered a new species of dwarf boa in the Ecuadoran Amazon and named it after an Indigenous activist.