One Candidate One Constituency: 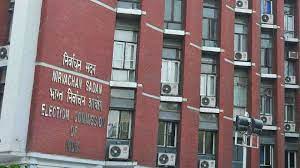 The Chief Election Commissioner asked the Ministry of Law & Justice to limit the seats from which a candidate can contest to just one.