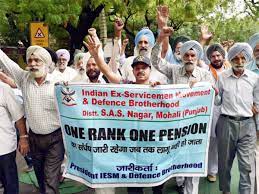 The Supreme Court asked the Centre to show how many persons in the Armed forces have benefitted from ‘One Rank One Pension’ (OROP) policy.