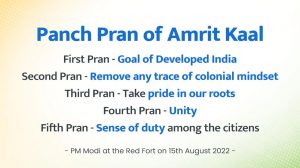 In his Independence Day address, Prime Minister Narendra Modi asked Indians to embrace the “Panch Pran” — five vows — by 2047 when the country celebrates 100 years of independence. The first vow, he said, is for India to become a developed country in the next 25 years.