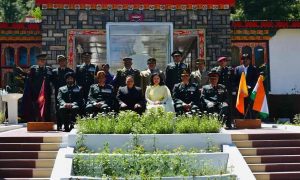 Project DANTAK is commemorating its Diamond Jubilee in Bhutan.