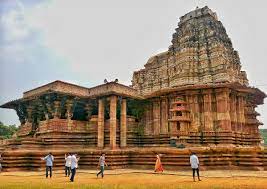 President of India lays the Foundation Stone for the Development of Pilgrimage Infrastructure at Ramappa Temple.