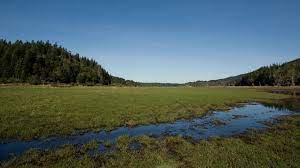 A study has been published, which has raised doubt about the efficiency of restoring coastal habitats to offset carbon emissions.